All the studying paid off and I finally got my 2012 MCSA. I want to pursue further certification but i’m not sure where to start without going to a bootcamp first. I think I could get an SE on server, potentially, and trying for that might be the route I pursue. On to the topic at hand though, trying out Windows Azure.  I think this is an amazing product at a very reasonable price. The only downside to building servers in Azure
is that you can not virtualize within them exactly like if you where running a Hyper-V machine on local hardware. That aside my local licenses is expired and I cant test installing DHCP (this would not be a good idea in a real environment maybe a SQL instance would be a safer more practical thing to test the waters with in a real environment) on my Azure server and creating a federated trust between my server installed on my desktop and my azure instance to get the hang of actually using it. My only question becomes why run azure at all. I don’t see much use for it aside from individuals and small software firms. Basically people that want an instance of server and cant afford to pay thousands of dollars for it and maybe don’t need it for an extended period of time. Obviously I googled this and came up with an article (click the link and share thoughts in comments if so inclined). I suppose this fits in with the trend of SaaS business models and could be tremendously helpful to certain groups of people. With the growing trend of a return to terminal computing its possible that would could have terminal servers in the future which could potentially improve SLAs at a cost savings to companies but I’m sure that they wouldn’t come without a side of temprementalness due in no part to the reliability of WAN links.

On to my experience with Azure. I create my free account, available on the Azure website and this was the screen I was shown upon logging in

Where I assumed I was supposed to deploy a server

There are also tutorials but its a really simple process to create a server in this environment. Once you choose what type of machine you want to deploy your given a series of options to configure your box for deployment and it gives you pricing options for various hard drive and ram sizes. I chose the base package of Server 16 Datacenter (datacenters virtualization features are useless as previously mentioned)

To create a machine just click the green plus in your portal (or what ever they are calling it) and then you are given options for what type of build you would like to create. They give Linux as an option which is really a way that I could see this going as a target for people that want to do their own web hosting but don’t necessarily want their own hardware.

Once you complete the build you are taken to like a server manager type view and given the option to basically remote desktop into the server. This is where I ran into trouble not realizing that that user name field was case sensitive. One thing I was surprised by though is upon tweeting about it I received a reply from an official msft account and they went back and forth with me until we figured out what I was doing wrong. Really awesome customer care experience.

This is actually prompting for your admin account you set up when starting up the server. Kind of confusing at first but not really.

You cant install the hyper-v role which is kind of bummer for me. I understand the logic behind it but I don’t understand offering datacenter without virtualization benefits. I see lots of uses for this product and am very excited about it. I personally don’t really have a need for it outside of studying and most of my studies would require an extensive server group which the cost of that without being able to virtualize inside one host would add up fairly quickly but not as quickly as buy a server license.

Update. Today I got an email from Microsoft pitching the backup and disaster angle of Azure, which honestly is the biggest factor for purchasing an offsite sever other than potential cost savings, that I was happy to see. I’m still not 100% sure about the practical implementation of this solution in enterprise environments though. Excited to see who develops this as a solution. 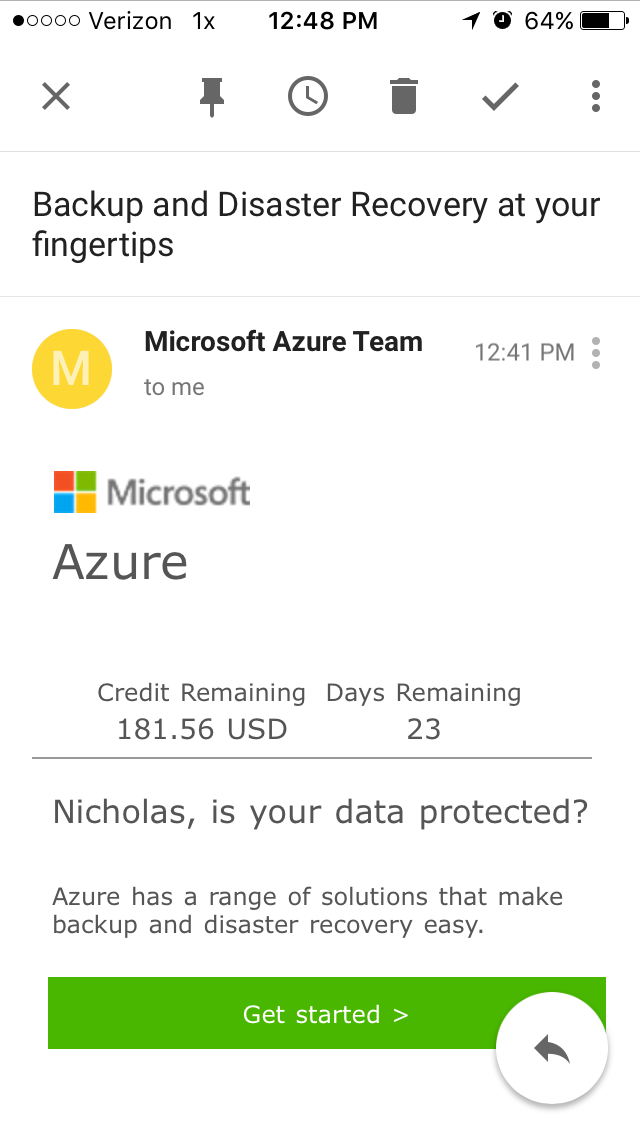