There is so much to IPAM that I need to cover for my self. In this post im looking at administrative roles and configurations. There are two questions that I’m looking and I think I’ll start with the easier of the two. 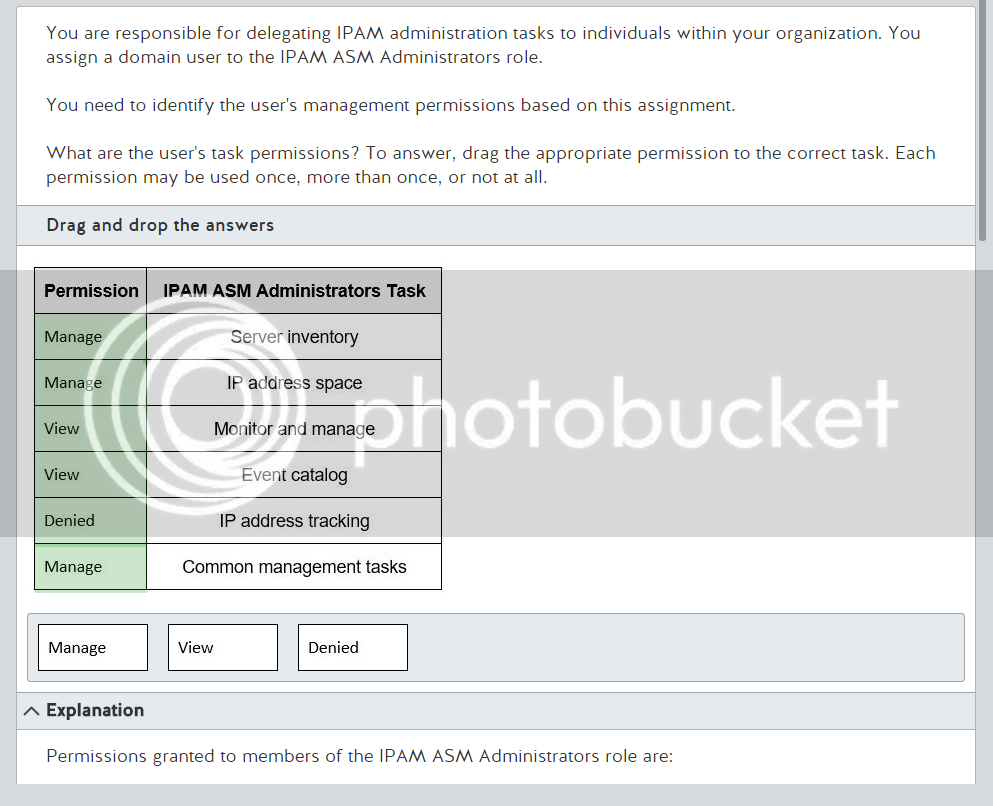 This question specifically looks at all the roles and features of ASM admin however there are also a few more potentially assigned roles along with a way to set an access scope (as previously discussed) by setting an IP range. I’m starting to kind of understand the concept but I would like to take a closer look at this as this granular scope of definition question was not quickly answerable to me. It’s quite possible I’ve covered this in a previous post but its not quickly memorable to me so I’m going to go over the entire thing again for my own sake.

This is the most helpful thing I’ve found so far. This was not on the 2012 test, that I recall but MesureUp keeps going over this and so far hasn’t even mentioned Sysvol replication or that GP exists, really.

I suppose there isn’t really much else to discuss about this. It’s memorization of what each can do. Lets move on to the next one, shall we. Not feeling super sassy tonight to be honest so you may find this one less colorful than usual. I went to bed early and I guess took a nap and woke up fairly late at night and decided to spend some time with this ol’ thing.

This one is a little trickier than the pervious question. There are two Micosoft links however the layout isn’t quickly helpful for pointing at a bulleted list concerning the specifics of this question. I’m currently trying to watch a silent film in the back ground with a truly insane soundtrack so forgive me if my ‘comments from the peanut gallery’ are not quite as up to par as usual on this one.

This one is alot of hooplah about about what it could do without telling you. It’s like ‘Billy Maze here! You’ve heard of DNS well now theres IPAM and we do all the work for you! Look a graph! But wait there’s more!’ Honestly, not completely roasting it as there is some useful information here, mostly under the header of ‘IPAM deployment options’ also with a helpful flow chart. I give the town names Hyderabad and Bangalore for very clear normal places that people would have remote offices (hoping they are using slow link detection on this amazing global escalator). This thing is like a real syphonmy.

Ok, so the IPAM specifications might be really helpful but its still not detailed enough to really answer this question.

This one is actually specific as to discussing its possible to use IPAM over a two way forest trust in different forests but its not super clear on the specifics. I suppose having one server to manage multiple forests is helpful. The only tricky part of the question is that ever so important ‘,’ between ‘domain controllers DHCP servers, and DNS servers’ as the material specifies that DHCP servers and DNS servers will be accounted for but given the, at times, questionable language involving specifics I could see them wording DCs running DHCP as one thing, which would be discoverable by default.

This took entirely too long to write but I think I’m sort of starting to understand this. However there is one last thing thats worth reading:

Seems fairly straight forward, as per the documentation, don’t forget to create a user account for VMM though. However, in the real world, who knows if it works that eaisy. It quite possibly does but you never can tell.